I was invited by Africa and Beyond (an independent tour operator, specialising in Africa, the Indian Ocean Islands and the Middle East) to join them on an exciting trip of the KwaZulu Natal area of South Africa, along with 4 other independent agents and 2 representatives from the company.
We flew with British Airways on their new direct route from London Heathrow to Durban which only launched 5 day prior on 29th October. We were fortunate enough to be upgraded to Club Class which started the journey off the right way in the Galleries Club Lounge. On Upon arrival into Durban at just after 5am, we were fast tracked through customs where we were met by our guide for the week, Tom from Shaka Tours & Safaris (leader in the tourism industry primarily in KwaZulu-Natal). 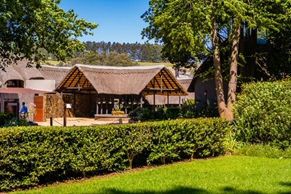 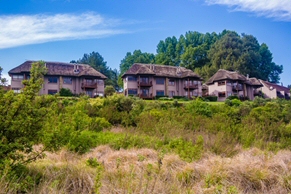 From the airport we headed to our first hotel, Granny Mouse Country House which is located in the heart of the KwaZulu Natal Midlands area at the foot of the Drakensburg Mountains. After breakfast, a site inspection and a freshen up we were treated to a relaxing massage in the onsite spa – perfect after a night flight! The afternoon was spent on a guided walk by our tour guide of the surrounding countryside, finished off with a riverside picnic. The hotel is currently undergoing a refurbishment of the restaurant and pool area so breakfast was taken in the conference area and we had the use of the private dining room, The Wine Cellar for dinner (lovely, yet a little chilly!). The location of all the rooms and suites is very similar, however some of the Deluxe Suites have been recently refurbished so would always request these where possible.

Day 2
After breakfast we were transferred to Cleopatra Mountain Farmhouse for a site inspection. The hotel is very well known for its gourmet food (Unfortunately we didn’t have a chance to sample it so I cannot comment on whether it lives up to its reputation!). Rooms here are very individually styled and possibly would not be to everyone’s taste .The location is in a tranquil setting of KwaZulu Natal’s Drakensberg Mountains, right on the border of Giants Castle Nature Reserve. It is recommended to have your own car here as it is quite remote, however the hotel are able to arrange excursions and transfers if necessary. 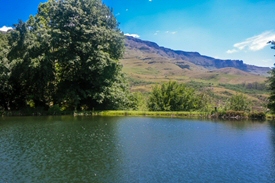 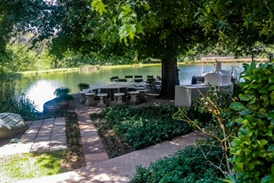 Following the inspection we made our way to our next hotel, Fordoun Hotel & Spa. Along the route we made a stop at ‘The Junction’, an outside shopping complex/market, a perfect place to get that essential souvenir. And if you are looking for a chocolate adventure ‘Chocolate Heaven’ is the place you wouldn’t want to miss. We did partook in their famous ‘Dippingz experience’ which was great fun. 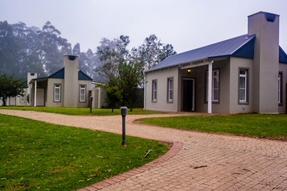 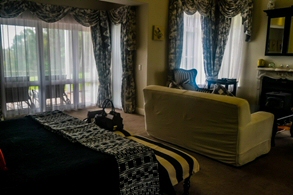 On arrival at Fordoun we were warmly welcomed, with an afternoon spent using their spa facilities, which worked out well as it was the only time in the 7 days we had rain. On site the hotel has two African therapy rooms and Dr Eliot Ndlovu’s consulting room. Eliot is an Inyanga (medicinal healer) and Sangoma (spiritual healer) and he was kind enough to give us an informative talk on the wisdom and healing powers of Africa. Eliot is well known in the KwaZulu Natal area so booking a consultation with him in advance via the hotel is essential. Fourdoun advised us that they are planning to refurbish the Spa soon, as it was quite evident that it was a bit tired around the pool areas. During the visit I stayed in one of the Superior Mountain Facing Suites and although slightly further from the main hotel it was, in my opinion, the best location and possibly the biggest suite I have ever stayed in. The distance is not a problem however because Golf buggies are always on hand to get you from A to B.

Day 3
Following a leisurely breakfast we were transferred to Fordoun Farm Village – a self-catering complex located less than 5 minutes by road from the main hotel. There are 9 luxurious chalets which would be the perfect alternative for families or a group of friends. Adults can still use all the facilities of the hotel. 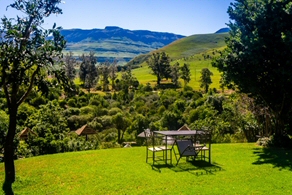 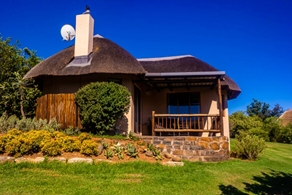 Our next stop was Montusi Mountain Lodge, located halfway between Durban and Johannesburg, offering full uninterrupted views of the Drakensburg Mountains. After lunch we checked into our Garden Suites and then headed for the stables where we had the most breath-taking 2 hour guided Horse Riding experience. 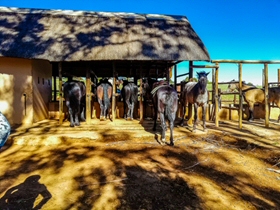 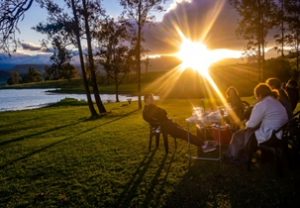 Day 4
The day started off with early breakfast after which the group was met by a local guide who took us one of the shorter walks, a 2 hour hike to Bushman’s Cave. 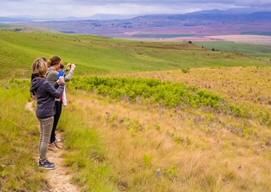 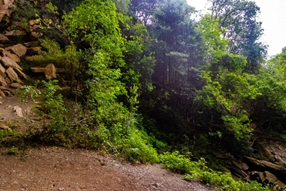 Then we headed to our next destination and after a 2 hour drive, our guide dropped us off at Nambiti Plains Private Game Lodge, which was the home for our next 2 nights. This Lodge is an exclusive Big Five bush retreat, in the Malaria Free Nambiti Game Reserve in KwaZulu Natal. 22,000 acres. There are only 7 suites on the complex and 2 different room categories, Honeymoon Suites and Luxury Suites. Both to the same standard, all with floor to ceiling windows across the reserve. 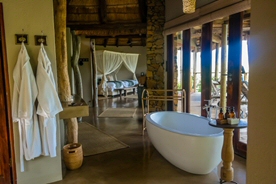 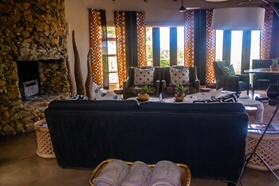 We set off for our first 3 hour Game Drive at 4pm and returned to a traditional African Boma Dinner. 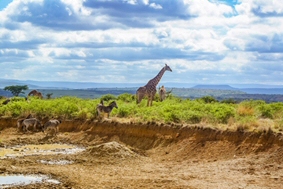 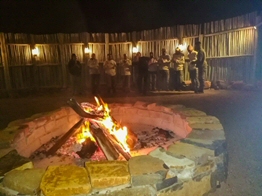 Day 5
Early morning wakeup call had us ready for our 5am game drive after which we returned to the lodge for an al fresco breakfast. After a few hours at our own leisure enjoying the natural scenery around the lodge we headed for a river picnic at the spectacular ‘Sundays River’ (This would usually be at a supplement). Then we went straight out on our afternoon game drive. 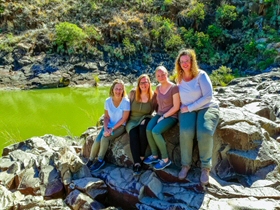 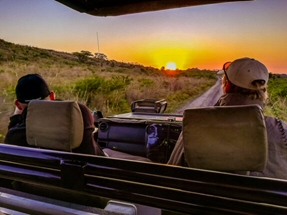 Day 6
Following our final game drive, we were met by our guide and transferred to Fugitives Drift Lodge. After lunch we were taken out for a tour of one of the Battlefield sites – Rorke’s Drift. This is the site where , Just over 150 British and colonial troops successfully defended the garrison against an intense assault by 3,000 to 4,000 Zulu warriors, winning 11 Victoria Crosses the most ever received for a single action by one regiment. Return back to the lodge gave us some time to spruce ourselves up before a hosted dinner. 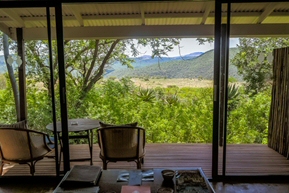 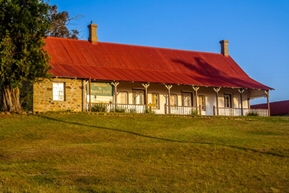 Day 7
Early breakfast before heading out on a site inspection of the neighbouring guest house (about a 5 minute drive away) .The guest house and the self catering cottage is a more cost-effective alternative to the lodges. After this we took a short walk to the nearby grave sites of the warriors following on from the Battlefield tour we had yesterday. Next it was time for the transfer to Durban – by helicopter! This provided the most amazing views across the Drakensburg area and took approximately 1 hour rather than 4 hours by road, so well worth it! Also, worth remembering Fugitives Drift offer a Battlefield Tours by air which run in peak season from January through to March. 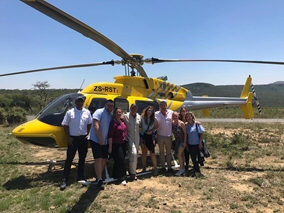 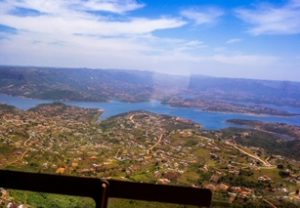 On arrival into Virginia Airport we hopped into a private transfer for the short journey to the iconic Oyster Box. The Oyster Box is one of the Red Carnation Hotels and has won many awards and accolades including being voted number 1 in the top hotels in South Africa for the last 2 years running and after a site inspection it is very evident as to why. We spent the afternoon at our own leisure with a few of us enjoying the sea air on the beach and the others doing a spot of shopping. We then retired back to the hotel for a shower and change before our final evening which, after a cocktail reception, was spent in the Grill Room, this restaurant has been known for it’s fine dining and outstanding cuisine for almost 70 years. 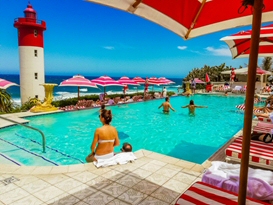 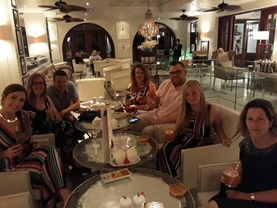 Day 8
After a few hours sleep it was unfortunately an early alarm call for our 7:35am flight back to Heathrow. This trip has exceeded the expectations I had of South Africa. The KwaZulu Natal is such a diverse area with something for everyone. The area is often overlooked in favour of it’s more famous Western Cape.
I will not hesitate to recommend this diverse destination.

https://www.travel-stop.co.uk/wp-content/uploads/2018/12/P1000112.jpg 3000 4000 Travel Stop https://www.travel-stop.co.uk/wp-content/uploads/2016/09/TP.png Travel Stop2018-11-15 16:09:032019-07-19 11:17:24SOUTH AFRICA - KWAZULU NATAL by Louise Gorbatov
Many of the flights and flight-inclusive holidays on this website are financially protected by the ATOL scheme. But ATOL protection does not apply to all holiday and travel services listed on this website. Please ask us to confirm what protection may apply to your booking. If you do not receive an ATOL Certificate then the booking will not be ATOL protected. If you do receive an ATOL Certificate but all the parts of your trip are not listed on it, those parts will not be ATOL protected. Please see our booking conditions for information or for more information about financial protection and the ATOL Certificate go to : www.atol.org.uk/ATOL Certificate

Venice and the Venice Simplon Orient Express by Cheryl Locke

Vienna City Break by Bridget Keevil
We use cookies on our website to give you the most relevant experience by remembering your preferences and repeat visits. By clicking “Accept All”, you consent to the use of ALL the cookies. However, you may visit "Cookie Settings" to provide a controlled consent.
Cookie SettingsAccept All
Manage consent