In April I was invited to Marbella for a short break by Caribtours and, due to an early departure from Gatwick, I stayed the night before at the Hilton South Terminal. First thing in the morning I took the Inter-Terminal shuttle to the North Terminal and, not having done this before, was surprised to find how quick and easy it was.

We were met in Marbella by a car and driver which had been organised by the hotel. Even though Caribtours do not have any ground handlers in the area, they will include all transfers in the cost of the holiday and arrange for the hotels to collect their guests from the airport. This certainly worked well and efficiently.

The first hotel we were due to stay at was the Marbella Club and, upon arrival, were taken to lunch at their Beach Club Restaurant. The hotel’s General Manager hosted us and entertained us with stories about the hotel over the years. We were then shown around the property and the facilities, including the Spa and Wellness Centre, pools, Children’s Club, and gym. The hotel will create a personalised wellness programme for their guests to ensure it meets their needs and therefore they are able to do as much or as little as they like. Free activities such as yoga sessions are on throughout the day.

We were shown various different room types which included Garden Suites, a One-Bedroom Suite, a Two-Bedroom Suite and a Four-Bedroom Villa. The villas are self-contained and have a private pool and are centrally located within the resort. All rooms are very god sizes and the décor beautiful.

The first evening we ate at the McCafe, one of the hotel’s restaurants which has a relaxed and cosy feel to it. The second evening, we ate at the Grill Restaurant which was more formal and where the food was stunning.

The Marbella’s Club’s slogan is ‘Elegant Simplicity’ – this is a perfect description of the entire property.

The second hotel which was to host our small group was the Puente Romano, located just down the road from the Marbella Club. This hotels has a completely different feel, is a lot larger and where the clientele was younger.

Upon arrival we were taken straight to the tennis courts, for which they are well known, and were given some coaching. Here, guests are able to book a court and play independently or have a coach as we did. They often host tournaments also.

Following this, we had a tour of the property and were shown various different rooms types. The One-Bedroom Sea Facing Suite, which had a very large balcony which included a hot tub, is perfect for honeymooners or guests looking for something a little extra special. The beach front Four-Bedroom Villa has its own private entrance with private parking and, as it is gated, is very secure. This villa really had the wow factor with four large bedrooms and en-suites, a large living area and private pool.

Elsewhere in the property we were shown their newly refurbished rooms, all which had a contemporary feel. I stayed in a Junior Suite which had not been refurbished and you could definitely see the difference. The décor was much more traditional.

The facilities at the Puente Romano include a Spa and the Fitness Centre, with the tennis courts and many swimming pools. The restaurants and nightlife are a big highlight at this hotel. There is a gluten free café, Rachel’s Eco Café (which is prefect for the health conscious), the Sea Grill (where we enjoyed a Paella cooking demonstration) and, in La Plaza, they have a Thai, Italian and also a Nobu restaurant. These are in addition to the many other restaurants throughout the hotel. In La Plaza there is also a bar and nightclub. 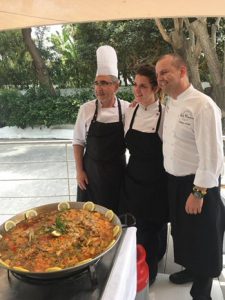 We were also shown around the new Nobu Hotel, which is not yet open to the public, which is a very contemporary property within the grounds of the Puente Romano.

The location of both properties visited is really good and on a lovely part of Marbella beach. From the Marbella Club we hired bikes and rode into the Old Town of Marbella which took about 20 minutes which was lovely to ride along the boardwalk overlooking the beach. In Marbella Old Town we were able to see the traditional Spanish Culture and try out one of the many Tapas Bars. We also experienced an Olive Oil Tasting. 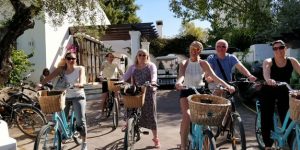 Marbella is a destination which surprised me and I particularly like the Old Town and the history behind the Marbella Club. The climate stays mild all year round and, due to its location next to the mountains, I consider it a great place to visit year round. We had beautiful weather whilst there in April and this is apparently quite typical.

https://www.travel-stop.co.uk/wp-content/uploads/2018/05/marbella-1823543_1920.jpg 1440 1920 Hannah Moore https://www.travel-stop.co.uk/wp-content/uploads/2016/09/TP.png Hannah Moore2018-05-12 14:05:262019-03-27 12:43:03Marbella, Southern Spain by Hannah Moore
Many of the flights and flight-inclusive holidays on this website are financially protected by the ATOL scheme. But ATOL protection does not apply to all holiday and travel services listed on this website. Please ask us to confirm what protection may apply to your booking. If you do not receive an ATOL Certificate then the booking will not be ATOL protected. If you do receive an ATOL Certificate but all the parts of your trip are not listed on it, those parts will not be ATOL protected. Please see our booking conditions for information or for more information about financial protection and the ATOL Certificate go to : www.atol.org.uk/ATOL Certificate

Venice and the Venice Simplon Orient Express by Cheryl Locke
We use cookies on our website to give you the most relevant experience by remembering your preferences and repeat visits. By clicking “Accept All”, you consent to the use of ALL the cookies. However, you may visit "Cookie Settings" to provide a controlled consent.
Cookie SettingsAccept All
Manage consent