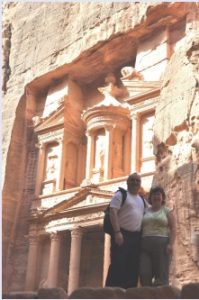 For our 30th Wedding Anniversary, Bridget and I decided to travel to Jordan using Cox & Kings. Amman, Jerash, Petra, Wadi Rum and the Dead Sea were the main attractions. We had private guides and a driver, who enhanced our trip with a superb level of knowledge of the area.

We walked in the footsteps of Abraham and Jesus along the Al Ayoun Trail. We had a tour of Amman, the capital of Jordan, and Jerash, where Hadrian once lived. We had a stop at Mount Nebo where Moses saw the promised land. On to Madaba, Karak and Shoubak before arriving at my highlight of the trip – Petra.

Seen in the movie “Indiana Jones The Last Crusade” Petra’s Treasury certainly has the wow factor. 400 year BC the Nabatean people carved it out of solid rock. This is the beginning of Petra which was the size of a small city covering 46 square kilometres. After a guided tour we climbed over 800 steps to the Monastry. Even larger and more stunning than The Treasury, it is a must to see on this trip.

After two days discovering Petra we drove to the Wadi Rum Desert to spend a night in a Bedouin camp. Eating and drinking local food we then relaxed under the stars before retiring to our tent with proper beds. 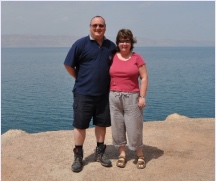 Next stop was the Dead Sea. At -420 metres below sea level and 33% salt content the Dead Sea is the lowest elevation on the earth’s surface. The density of the water makes swimming more like floating.

During our visit to Jordan we encountered none of the trouble seen in some other Arab countries. A drop in visitor numbers made this trip even more enjoyable.

https://www.travel-stop.co.uk/wp-content/uploads/2016/09/jordan3.jpg 173 220 Paul Keevil https://www.travel-stop.co.uk/wp-content/uploads/2016/09/TP.png Paul Keevil2011-05-16 10:54:142016-11-16 15:37:35Jordan
Many of the flights and flight-inclusive holidays on this website are financially protected by the ATOL scheme. But ATOL protection does not apply to all holiday and travel services listed on this website. Please ask us to confirm what protection may apply to your booking. If you do not receive an ATOL Certificate then the booking will not be ATOL protected. If you do receive an ATOL Certificate but all the parts of your trip are not listed on it, those parts will not be ATOL protected. Please see our booking conditions for information or for more information about financial protection and the ATOL Certificate go to : www.atol.org.uk/ATOL Certificate

Abu Dhabi
We use cookies on our website to give you the most relevant experience by remembering your preferences and repeat visits. By clicking “Accept All”, you consent to the use of ALL the cookies. However, you may visit "Cookie Settings" to provide a controlled consent.
Cookie SettingsAccept All
Manage consent