1
You are here: Home / News / Blog / Singapore by Sacha Hale 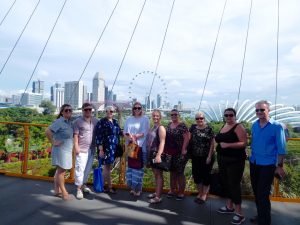 My trip got off to a lovely start. After we checked in, we were directed to the first class lounge for Singapore airlines. Here we enjoyed a buffet breakfast and Champagne while we waited to board our flight. We flew to Singapore in premium economy class, and although the flight was 14 hours, the service was impeccable and the food was to a good standard. The onboard Entertainment was showing  all of the latest films and the USB port came in very handy for charging during the flight. The seats were very comfortable and the additional leg room allowed you to relax comfortably.

On arrival at the very spacious and serene Changi Airport, we were then transferred to the park hotel Clarke Quay which is only a 30 minute drive away. My first thoughts on Singapore were, that it was a large bustling city, but extremely clean, well organised and well groomed.

The park hotel is ideally situated in the Clarke Quay area of Singapore, where there are many restaurants and bars within easy walking distance, next to the river. The hotel rooms are  compact but have all the necessary essentials, as well as air-conditioning which I feel is an absolute must in Singapore. They also provide free mobile devices for use during your stay for both calls and internet access.  The hotel staff are friendly and courteous, and cater for all guests, be it couples or families. The hotel also has a small restaurant which serves food all day, and a swimming pool too.

Our first afternoon was spent taking a tour of the cultural precincts of Singapore. We visited the Buddha Tooth Relics temple in Chinatown and then followed on to the Kampong Glam Arab street and Haji Lane area’s, of Little India. We also took a walk to view some of the more historical residential houses on  Emerald Hill.

Dinner that evening was hosted by the Shangri-La hotel. This large five star luxury hotel is set in 15 acres of beautiful gardens, which includes an orchid garden with over 300 varieties, of their national flower, The hotel has played host to lots of high-profile guests.

On Tuesday our guide  Fharida, an amazing woman, took us to a local market on a foodelicious tour. We sampled lots of the local delicacies. My favourites were the Putu Piring, which is a steamed snack made from coconut rice and palm sugar, and the Apam which is a pancake filled with chopped roasted nuts and sugar.

Our  lunch today was hosted by the Marina Mandarin Hotel, which is situated close to the Marina Bay Area, with its large shopping centre, Art Science Museum and Gardens by the bay, to name a few of its attractions. It is a five star hotel with a stunning large central atrium, which is usually filled with bird song from their resident avian guests.

In the afternoon we all took a stroll over to the Marina Bay Sands Hotel to have a drink in the Sky on 57 rooftop bar. The views of the bay were absolutely amazing and we even enjoyed watching the clouds roll in before watching a quick downpour, which was  over in minutes.

After  dinner at the Park Hotel, we walked down to Clarke Quay, to visit the local bars. The area is next to the river, and the whole area is protected by an almost alien inspired canopy, so that any rain does not stop play.

On Wednesday we checked out of the Park Hotel and took our transfer over to the cable car which was to take us to Sentosa Island. Sentosa is a fabulous island full of fun activities to do. We tried out the Luge, which was hilarious and took a virtual ride on a log flume simulator. Sentosa also has a universal studios park and is home to Shangri-LA’s Rasa Sentosa Resort. The only beach resort that Singapore has to offer, with its lovely white sands that over look the South China Sea. The Hotel has plenty of facilities for both couples and families, with a very popular children’s club and a spa for the adults. The hotel is considered so special that it has a high percentage of repeat guests.

On returning to the mainland we checked in to the Jen Orchard gateway Hotel, where we would be staying for the next two nights. The hotel is situated on Singapore’s famous Orchard Road which is home to many shopping malls and designer shops.

We had drinks that evening at the roof top bar, beside the pool, and had 360° views of the Singapore skyline. Although by no means the most expensive, this Hotel rated as my favourite, as it was very new and modern and had several thoughtful touches in all of the rooms. These included a torch beside the bed, a hairdryer,an alarm clock, an iron and ironing board, an umbrella, and A do not disturb button which lights a message outside your door. The mini bars are empty but the hotel provides a vending machine and cold water and ice machine on every floor so that you can stock up with the things that you would like. Each room also has an eco-toilet which offers a bidet and toilet all in one. The Hotel is also situated directly above one of the MRT stations and another large shopping centre.

Our last full day in Singapore, started with a trip to the gardens by the bay, where we got to go on the skywalk around the supertrees. This was something I had been looking forward to all week, and it did not disappoint. The trees are absolutely amazing and are made up of many smaller plants. We even went back in the evening so that we could appreciate the light show that is performed twice  every night. 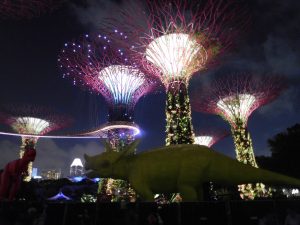 Lunch today was at the Mandarin Orchard Hotel, the largest hotel that we looked round this week. It is also situated in the Orchard Road shopping district. The food in the restaurant was lovely and is popular with the guests and public too.

We had a different city tour in the afternoon which started with a boat ride from Clarke Quay to the mouth of the bay. We docked next to the iconic Merlion statue, before walking through the Fullerton hotel’s heritage trail. 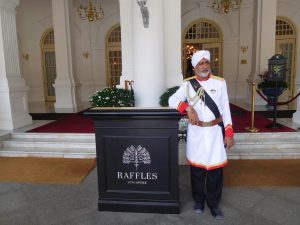 Our next stop was to be the famous Raffles Hotel, for a  tour of the hotel and to enjoy a Singapore Sling. 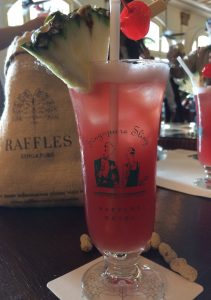 The long bar is currently closed as the hotel is undergoing a three stage renovation which should be completed in mid 2018. They are currently using the bar and billiard room as their bar, and have kept the tradition of dropping the peanut shells on the floor. The hotel suites exude an old colonial opulence, and a special privilege was to be escorted round the presidential suite where HRH Queen Elizabeth has stayed, the Duke & Duchess of Cambridge and Micheal Jackson. Although not all at the same time!

On our final evening we were taken to an Indian restaurant called the Banana Apollo Leaf, where we were entertained by the Head of Tourism for Singapore, and treated to an Indian meal served on the traditional banana leaves. We were advised this  should be authentically eaten with our fingers, as they do in India.

On Friday we flew home, again with Singapore Airlines, but this time in economy. I was pleasantly surprised at how spacious this was, even for an economy seat. There was enough legroom to stretch my legs out under the seat in front, and of course the service was equal to outbound journey.

I very much enjoyed my stay in Singapore, also known as the lion city or garden city. Our guide Fharida gave us a wonderfully passionate insight in to her home country, and I would highly recommend her services, to anyone wishing to learn more about Singapore, to enhance their stay. One of the things that she speaks about, is her will to impart to others, that Singapore is a vibrant country, which has lots to offer. Not just for a stopover on the way to other destinations, but as an independent holiday destination on its own merits.   I would completely agree with her.

https://www.travel-stop.co.uk/wp-content/uploads/2017/03/IMG_6945.jpg 240 320 Sacha Hale https://www.travel-stop.co.uk/wp-content/uploads/2016/09/TP.png Sacha Hale2009-03-01 17:41:352021-09-24 15:46:21Singapore by Sacha Hale
Many of the flights and flight-inclusive holidays on this website are financially protected by the ATOL scheme. But ATOL protection does not apply to all holiday and travel services listed on this website. Please ask us to confirm what protection may apply to your booking. If you do not receive an ATOL Certificate then the booking will not be ATOL protected. If you do receive an ATOL Certificate but all the parts of your trip are not listed on it, those parts will not be ATOL protected. Please see our booking conditions for information or for more information about financial protection and the ATOL Certificate go to : www.atol.org.uk/ATOL Certificate

Deccan Odyssey Luxury Rail Journey
We use cookies on our website to give you the most relevant experience by remembering your preferences and repeat visits. By clicking “Accept All”, you consent to the use of ALL the cookies. However, you may visit "Cookie Settings" to provide a controlled consent.
Cookie SettingsAccept All
Manage consent