1
You are here: Home / News / Blog / Rome and Florence by Sacha Hale

On the 12th December I decided to stay at the Sofitel Hotel at Gatwick Airport, prior to boarding my flight to Rome early on Tuesday morning. I am so pleased that I did, as it helped to make my journey a more relaxed experience, rather than risking any traffic hold ups on the way down.  I would definitely do this again, as the hotel was very comfortable.

Getting into the airport in the morning was easy, as the Sofitel is joined to the terminal itself. I didn’t even have to go outside!

My trip was very kindly hosted by Classic Collection holidays, who I have also travelled with on my own family holidays. We then made the short flight of two and a half hours to Rome, with Easy jet.

On landing, our first stop was to have lunch in the Michelin Starred restaurant of the Hotel Palazzo Manfredi. Straight away we were wowed, as the hotel’s roof top restaurant gives an amazing view of the Colosseum, only meters away from our table. We were told that the restaurant was a very popular location for proposals, and that the staff will help to create a romantic setting for each couple. The rooms at the Palazzo Manfredi have been decorated in a modern yet classical style, and to a high standard. 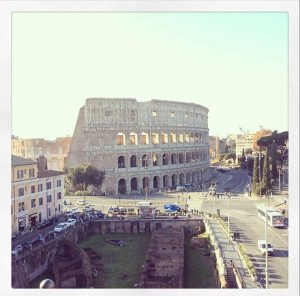 From here we checked into the Hotel Bernini Bristol where we were staying for two nights. The hotel was built in the late 1800’s and has beautifully grand proportions. There is a choice of either Classically styled or modern styled rooms, and the hotel also boasts a rooftop Michelin starred restaurant, with views over the Piazza Barberini.

Whilst staying in Rome we were taken on a walking tour of the city, taking in the sights of The Spanish Steps, Piazzo Navona, The Pantheon, and The Vatican to name but a few. The  Classic Collection Holidays featured hotels, are all very well situated within the heart of the city, and with all of Rome’s places of interest being relatively close to each other, it is easy to explore. 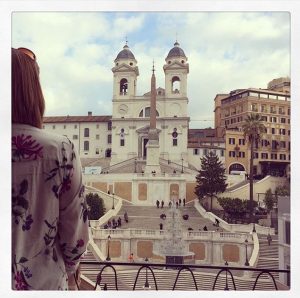 During our stay in Rome we visited the Hotel Gran Melia Rome Villa Agrippina, The Inn & View at the Spanish Steps, The Hotel D’Inghilterra, the Hotel Dei Mellini and the River Palace Hotel. Each has its own style and charm, and offers both Classical or modern rooms.

On Thursday we took the high speed train to Florence, in business class, through the Latium and Tuscany regions of Italy. The railway terminal in Rome was very easy to navigate, and the trains were modern, clean and very efficient.

Florence is a beautiful city which is surrounded on three side by mountains and on the forth by the River Arno. It is the capital of Italy’s Tuscany region, and is home to many highly revered pieces of renaissance Art and architecture. This city is also completely accessible on foot, as all of its spectacular masterpieces are within easy walking distance of each other. 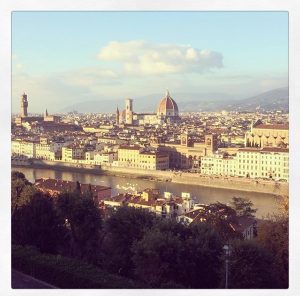 We stayed for two nights at the Hotel Brunelleschi, which is a stones throw away from the famous Duomo and Clock Tower, with its iconic dome. This Hotel also recently featured in the Tom Hanks film ‘Inferno’ from the Da Vinci Code series.

All of the hotels we visited in Florence had stunning architecture and the Hotel Villa Cora, the Grand Hotel Minerva, and the Sina Villa Medici all offer amazing views of the city and night skyline.

During the day on Friday we had a guided walking tour of some of Florence’s sights. The Duomo and Bell Tower, and the Ponte Vecchio were my personal favourites. We also had time to visit a Christmas market and a leather workshop, where we watched the artisans making handbags and embossing 18 carat gold lettering on to the leather.  On one evening we had dinner in a typical Tuscan Restaurant, and sampled some of the local dishes. 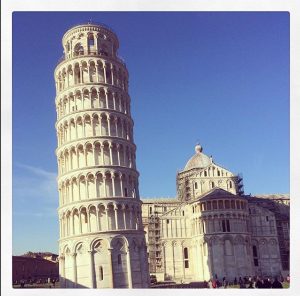 To round off our trip we took a slight detour on the way to Pisa airport, to look at The Leaning Tower of Pisa, which surpassed my expectations and was leaning far more than I imagined!

https://www.travel-stop.co.uk/wp-content/uploads/2016/12/pexels-photo-219041.jpeg 1201 1600 Sacha Hale https://www.travel-stop.co.uk/wp-content/uploads/2016/09/TP.png Sacha Hale2009-12-12 13:47:412021-09-24 15:49:40Rome and Florence by Sacha Hale
Many of the flights and flight-inclusive holidays on this website are financially protected by the ATOL scheme. But ATOL protection does not apply to all holiday and travel services listed on this website. Please ask us to confirm what protection may apply to your booking. If you do not receive an ATOL Certificate then the booking will not be ATOL protected. If you do receive an ATOL Certificate but all the parts of your trip are not listed on it, those parts will not be ATOL protected. Please see our booking conditions for information or for more information about financial protection and the ATOL Certificate go to : www.atol.org.uk/ATOL Certificate

HOW TO ACE DISNEY by Camilla Packard
We use cookies on our website to give you the most relevant experience by remembering your preferences and repeat visits. By clicking “Accept All”, you consent to the use of ALL the cookies. However, you may visit "Cookie Settings" to provide a controlled consent.
Cookie SettingsAccept All
Manage consent