We travelled from St Pancras on the Eurostar in Standard Premier class, this class of travel gives you more spacious seats in a dedicated carriage where you are served a light meal and drinks. In around 2 hours and 15 mins we reached Paris Nord. 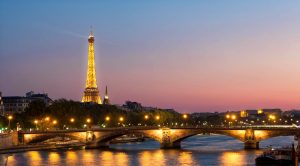 We were taken on a very short walk across the street to the Brasserie du Terminus Nord for a two-course lunch. Located opposite the main station entrance, this is an atmospheric brasserie which is well frequented by locals. Daily changing menu plus excellent chou croute, wonderful shellfish, great steak tartare and a good house Riesling. An excellent place to eat if you are leaving Paris by train or on your way to Charles de Gaulle airport. After lunch, we visited the Musée d’Orsay. This museum is housed in a building that was originally a railway station along with a luxurious hotel and a grand reception room which you can still see original features of. We had a private guide for this visit which was excellent as it gave us a great insight into the many paintings, sculptures, photo’s, decorative arts and drawings that the museum presents in all its diversity. After this we checked into our hotel for the night Grand hotel du Palais Royal. This hotel is located close to the Louvre and has 68 rooms. I would highly recommend this hotel. 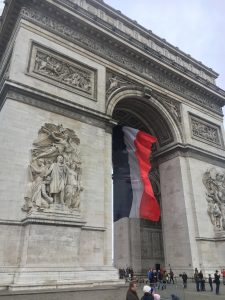 After a quick change, we were whisked off to the Four Seasons George V – just off the Champs Elysees, this is one of the most luxurious ‘palace’ hotels in Paris. Flowers are their art here spending more than 2 million Euros a year on over 1000 flowers a week. The hotel has the largest wine cellar in France with over 50,000 preferences. We sampled the ‘taster menu’ in the hotel’s Michelin star restaurant. Highly recommended for a special treat costing 110 euros per person.

The next day, prior to going to the airport, we had a whistle stop private guided sightseeing tour of a selection of the main attractions of Paris including the Eiffel Tower, Arc de Triomphe, Moulin Rouge and the scenic view over Paris from Montmartre Sacre-Coeur.

When we arrived at Orly for our flight to Nice we found out our flight had been cancelled due to Air France Air Traffic strikes. As we were a group of 14 it was impossible to find seats on alternative flights so rather than abandon the trip it was decided that we would hire some vehicles and drive the 945kms to Monte Carlo. With stops this journey took around 10 hours. We arrived into Monte Carlo around 2.30am. I can honestly say it was worth every second of that 10-hour journey.

The principality of Monaco, and its prestigious district of Monte Carlo, maintain a world-renowned reputation as a glamorous home to the rich and famous. Situated on the coast of the Mediterranean, Monte Carlo is only a short 7-minute helicopter ride away from Nice airport, though you can easily access this beautiful and unique sovereign state by bus, train or car. 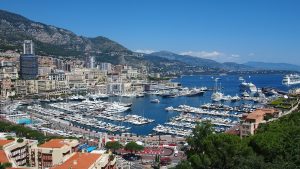 An attractive city break destination, Monte Carlo rests on a prominent slope at the base of the Maritime Alps, providing a stunning landscape of mountains and sea. Officially established in 1866, records of the port area go back as early as 43 BC. Today, the region offers an engaging mix of historical and modern attractions including the pedestrianized medieval village of Monoco-Ville, the stunning Opera House and the popular Grand Casino. You will also find a selection of museums including the classic car collection of HSH The Prince of Monaco, which we were fortunate enough to visit. The other main attraction on Monte Carlo is the annual Grand Prix. If you do decide to visit at this time the Fairmont hotel has rooms that have balconies with an amazing view of the hairpin bend. These do come at a price of around 36,000 euros for the 4 nights covering the Grand Prix!
Monaco has a different range of styles and size of hotels starting with the more traditional Columbus hotel, resort style Monte Carlo Bay, to the world-renowned Hotel de Paris.

When we left Monaco we had a 7-minute helicopter transfers to Nice Airport. Again, I would highly recommend this if you are thinking of visiting Monte Carlo.

Kirker Holidays can provide holidays via Travel Stop to either Paris, Monte Carlo or like I did, a combination of both.

Within their pricing for Paris, they include shared minibus or car transfers to and from the station or airport depending on your chosen mode of transport. A two-day museum pass which gives you access to over 60 museums and a carnet of five metro tickets.

Within their pricing for Monte Carlo, they include the ‘Passport to Monte Carlo’ this entitles the holder to complimentary entrance to a wide range of museums and attractions.

https://www.travel-stop.co.uk/wp-content/uploads/2017/03/pexels-photo-149522.jpeg 899 1600 Anita Crowson https://www.travel-stop.co.uk/wp-content/uploads/2016/09/TP.png Anita Crowson2009-03-18 13:07:112021-09-24 15:46:09Paris and Monte Carlo
Many of the flights and flight-inclusive holidays on this website are financially protected by the ATOL scheme. But ATOL protection does not apply to all holiday and travel services listed on this website. Please ask us to confirm what protection may apply to your booking. If you do not receive an ATOL Certificate then the booking will not be ATOL protected. If you do receive an ATOL Certificate but all the parts of your trip are not listed on it, those parts will not be ATOL protected. Please see our booking conditions for information or for more information about financial protection and the ATOL Certificate go to : www.atol.org.uk/ATOL Certificate

India – with Travelsphere
We use cookies on our website to give you the most relevant experience by remembering your preferences and repeat visits. By clicking “Accept All”, you consent to the use of ALL the cookies. However, you may visit "Cookie Settings" to provide a controlled consent.
Cookie SettingsAccept All
Manage consent