1
You are here: Home / News / Blog / MADRID AREA OF SPAIN by Helen Pardy-Taylor

Our destination: Castilla La Mancha – where’s that?
It’s a region in central Spain, to the South East of Madrid, and includes the provinces of Albacete, Ciudad Real, Cuenca, Guadalajara, and Toledo. 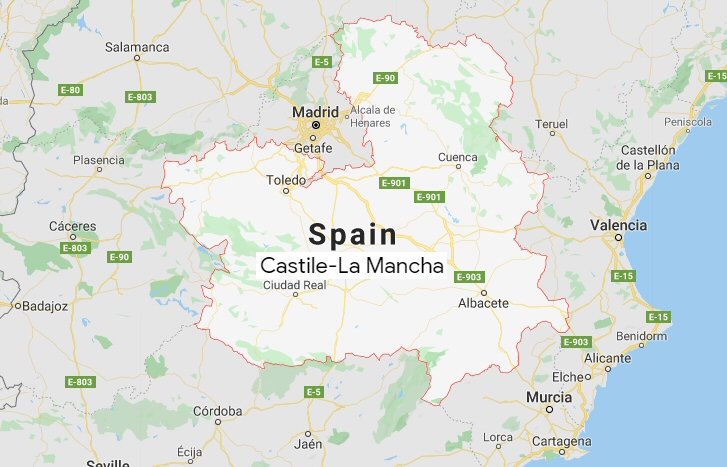 Friday 4th October
Myself along with Bridget, Anna & Emma P. were invited by ‘Typically Spain’ to visit this beautiful part of Spain. Checking in for a Ryanair flight at Stansted we arrived in Madrid after 2 hours 35 minutes. We were met on arrival by Carmen Diaz-Maroto from Castilla La Mancha Tourism Board and boarded a mini-bus for the hour drive to Toledo. Checking in just before midnight at the beautiful Hotel Eugenia de Montijo, Autograph Collection, a 5 star hotel in the city centre of the UNESCO world heritage city of Toledo. A boutique hotel formerly the palace of Empress Eugenia de Montijo, offers 40 newly updated rooms and suites with luxury amenities.

Saturday  5th October
The following morning we met with Carmen and a local city guide for a guided tour of Toledo. Comfy shoes are recommended for the cobbled streets which display a mix of Arab, Jewish and Christian monuments. I would recommend visiting early in the morning to avoid the many day-tripper groups. According to the Spanish, marzipan was invented by nuns of the Convent of San Clemente in Toledo and you will find marzipan products being sold in all cafes. The tallest marzipan sculpture can be seen in one of the shops in Toledo and represents Miguel de Cervantes ‘Don Quixote de la Mancha’. Don Gonzalo Ruiz de Toledo painting is on display in the church of Santo Tome in Toledo. The church opens daily and is best to view early to avoid the queues. The cost to see the painting is 3 Euros, this is the same fee for most museums/religious buildings. However, there is also a wristband for 10 Euros which includes seven of the most important emblematic monuments of Toledo:

Royal College of Noble Maidens
Church of the Jesuits
San Juan de los Reyes
former mosque of Cristo de la Luz
Santo Tome – where you find the work of El Greco ‘ El Burial of the Lord of Orgaz
The Church of the Savior
Old synagogue of Santa Maria la Blanca.

My favourite was San Juan de los Reyes with the gothic style in this beautiful monastery. The Primate Cathedral of Saint Mary of Toledo is a Roman Catholic church in Toledo which is not included in the wristband and charges 10 Euros for entry. This is an impressive example of medieval Gothic architecture. Even though we experienced very hot weather in the 80F+, due to the narrow streets and tall buildings this made the streets shady which was a welcome when walking around the city. We enjoyed a tapas lunch at Alfileritos24 in Toledo before boarding the mini-bus for our next destination.

After a drive of 1 hour 10 minutes we arrived at the windmills in Campo de Criptana, Ciudad Real – ‘ The Land of the Giants. ‘ One of the most iconic sights in Castilla-La Mancha is the landscape of white windmills, this is the place where self-proclaimed knight Don Quixote met with the giants ( actually the windmills themselves. ) The hills are crowned by 10 windmills which were popular in the Spanish countryside in the 16th century. After a further 1 hour 15 minutes we arrived in Almagro ( a town for those interested in the Arts. ) It has two notable theatrical landmarks both on the Plaza Mayor, a central square surrounded by centuries-old buildings. The ‘Corral de Comedias of Almagro’ is a well preserved 17th century open-air theatre and still in use today. Almagro is also very popular for lace-making which runs for generations in families which is of excellent value when you find out how long each piece takes to create. There is also a bobbin lace museum in the town. We checked into Parador de Almagro, a 16th-century former convent in the town, just a short walk from the central plaza. Dinner was at ‘La Posasa de Almagro’ and offers seating in the small main restaurant or the courtyard.

Sunday 6th October
After breakfast we were driven 1 hour 20 minutes to ‘Parque Natural de Las Lagunas de Ruidera’ a wetland offering a small group of Lakes and waterfalls. Some are protected yet others you may swim,dive and take a canoe. Very popular at weekends with the families and picnics. You would need a car, cycle or ride to discover each Lake. We drove a short way to ‘Cueva de Montesinos’ at the bottom of the cave is a small lake formed by rainwater. The water in this lake is also connected by underground streams with the natural park of Ruidera. Lunch was taken at Hotel Albamanjon, set on a hillside with the restaurant overlooking San Pedro Lake. An added stop was added to the itinerary, Tomelloso, a white hamlet, offering one of the oldest wineries with its cave of earthenware jars. Also visiting one of the largest wine co-operatives in Europe at their modern factory. During the tour, we stopped at the chimney ‘Fabregas’. The chimneys played an important part and is the symbol of the Industrial Revolution par excellence. Some of the chimneys reach up to 45 metres high. Our final journey was a two hour drive before arriving at Parador de Cuenca, a 16th-century former monastery. This stately hotel is a 5-minute walk from the Hanging Houses of Cuenca, not forgetting the hanging toilets of Cuenca……… watch out below!

Monday 7th October
The following morning we checked out and waited for our Spanish guide whose introduction included a talk of Puente de San Pablo ( Saint Paul Bridge ), atop the Huecar Gorge. This is a bridge crossing you won’t forget, especially if like me you are afraid of heights. The bridge though is the fastest connection between the Parador and Cuenca old town. The bridge was a little shaky with its wooden slatted floor and has low railings, however focusing on walking ahead, straight in the middle and not looking down I conquered my fear. Cuenca, a well-preserved medieval old town which is a UNESCO World Heritage Site, perched atop a craggy cliff face half-way between Madrid and Valencia. We wandered around the old town with our guide and visited the Catedral de Cuenca built on the site of the main mosque after the city’s reconquest by Alfonso VIII in 1177. The Cathedral houses many heavy floats, the last supper float is most impressive and is carried by no less than 66 people at Easter. We learnt about the Casas Colgantes (Hanging Houses and toilets) and sights of the bridge from the city to the Parador and over the gorge. We visited La Torre de Mangala which is the clock tower, in the middle of a historic area which is currently being developed. During the city walk we were told of the bull festival every September where a bull runs to the end of the street after which a different bull takes over. This way no bull gets worn out and no bulls are killed. You can also make out a local small lake with a sandy beach, great for the Summer months where you can visit, swim and have a picnic. The charge for entry is 6 Euros.

We stopped for lunch at Restaurante Raff, very popular with locals and tourists. We said our goodbyes to Carmen and boarded our mini-bus back to the airport and managed a brief 5 minute stop to view the Royal Palace of Madrid. Ryanair got us back at Stansted around 22:30 and with hardly anyone at passport control, baggage claim and security we had a swift car journey home.

What a full-on weekend that was!

Many thanks to Mariam Sajjad from Typically Holidays for creating many wonderful memories.

https://www.travel-stop.co.uk/wp-content/uploads/2019/12/windmills-4278679_1920.jpg 1199 1920 Travel Stop https://www.travel-stop.co.uk/wp-content/uploads/2016/09/TP.png Travel Stop2019-12-04 13:12:052021-12-01 15:20:02MADRID AREA OF SPAIN by Helen Pardy-Taylor
Many of the flights and flight-inclusive holidays on this website are financially protected by the ATOL scheme. But ATOL protection does not apply to all holiday and travel services listed on this website. Please ask us to confirm what protection may apply to your booking. If you do not receive an ATOL Certificate then the booking will not be ATOL protected. If you do receive an ATOL Certificate but all the parts of your trip are not listed on it, those parts will not be ATOL protected. Please see our booking conditions for information or for more information about financial protection and the ATOL Certificate go to : www.atol.org.uk/ATOL Certificate

THE QUEEN MARY 2 by Cheryl Locke

We use cookies on our website to give you the most relevant experience by remembering your preferences and repeat visits. By clicking “Accept All”, you consent to the use of ALL the cookies. However, you may visit "Cookie Settings" to provide a controlled consent.
Cookie SettingsAccept All
Manage consent