21 June 2014 I arrived at the British Airways check-in desk at Gatwick North Terminal where I was thrilled to learn we were travelling Club Class. I haven’t done this for several years and looked forward to trying out the flat bed. The flight was excellent, very comfortable with a good food and drink service and a great choice of in-flight entertainment. 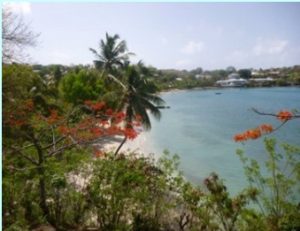 After a smooth transfer of only ten minutes I arrived at The Calabash Hotel Resort and Spa where I was shown to my pool suite overlooking the gardens and sea. My suite had a good sized lounge leading to the bedroom and an ample bathroom. It was nicely furnished and had a comfortable homely feel to it. The terrace at the back was really peaceful and the plunge pool was a good size. There were comfortable sun loungers and a table and chairs. The hotel is most suitable for couples, and single travellers would feel at home here too. The breakfast served on your own terrace each morning is a nice touch. Dinner was in the Calabash’s signature restaurant, Rhodes, overseen by British chef Gary Rhodes, serving excellent food with a good and varied menu.

22 June 2014 This morning we were shown around the resort. The pool, fitness room and spa were all of a good standard. We were then taken to view the villas. These are beautiful and well appointed with views to die for. They are great for families and groups. This afternoon we had lunch and a site inspection of Sandals La Source. We were shown every room type and from the lead in 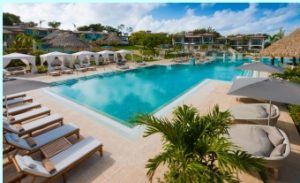 This afternoon we had lunch and a site inspection of Sandals La Source. We were shown every room type and from the lead in room to the butler suites, they are all of a very high standard, many with large bath tubs on the balcony. I loved the décor and soft furnishings. The public areas are also of an excellent standard and it is located on a lovely beach. Parts of the hotel overlook the runway, however this is not a problem as Grenada Airport is not that busy and it makes for a very short transfer. Dinner tonight was at the Mount Cinnamon Resort and Beach Club. After a rum punch or two we were shown how to make a mojito and were then let loose to produce our own pre dinner drink before being treated to fine dining in the well-appointed restaurant.

23 June 2014 After breakfast on my terrace at The Calabash we enjoyed a relaxed morning on the beach before checking out after our two night stay and heading to Coyoba Beach resort for a site inspection and lunch, then on to Spice Island Beach Resort for a two night stay. On arrival, after a rum punch, of course, we were shown around the hotel. As soon as I arrived at Spice Island the luxurious ambience was apparent and being set on a beautiful stretch of Grand Anse Beach only added to its appeal. 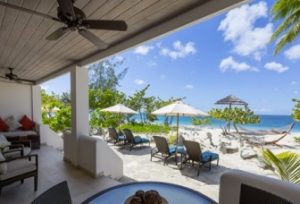 There are a range of suites to suit both couples and families alike, many with ocean views. I particularly liked the private pool suites which are located in the gardens as they did feel very private and are great for couples and honeymooners.

We looked at one of their three largest oceanfront suites – Saffron Suite and were told that Princess Anne had stayed there. It certainly is fit for royalty with a spacious lounge/dining room and bedroom, both leading onto a spacious terrace which leads directly onto the beach. The beautiful bathroom with its large heart shaped bath and walk in shower is huge! We were told that one of us would be staying in this suite type and lo and behold when the keys were handed out that someone was me! I walked around feeling a bit lost in such a spacious suite on my own, however I soon got used to it. 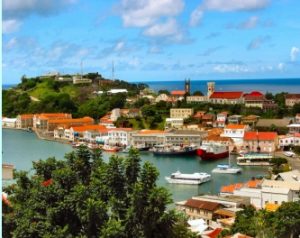 24 June 2014 Today we were off on an Island Tour. We headed up to Fort George and after a short climb we were rewarded with fabulous views of the capital, St George, below us and country views from the other side.

At a certain point we were able to walk up a flight of steps where the full force of the trade winds could be felt. Lunchtime took us in to the capital St George, a picturesque city and one of the nicest I have been to in the Caribbean. Lunch was in a local restaurant named BB’s Crabback Caribbean Restaurant owned by Brian and Anna Benjamin who were great hosts. Our table had a lovely view over the water and the curried goat, peas and rice was to die for. 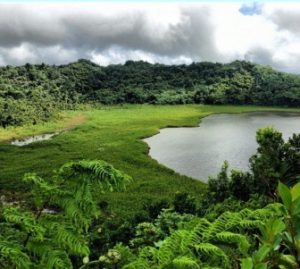 Next we drove up to Grand Etang National Park. Serious walkers can trek deep into the forested interior, however we opted for an easy half hour stroll around Grand Etang Lake, the centrepiece of the National Park.

We would usually be taken to Seven Sisters Falls but due to an extended dry season it was not felt worthwhile as it had been reduced to a trickle. This would be rectified as soon as the rains arrived.

We then visited Laluna for a site inspection, a relaxed spa hotel on a beautiful beach, suitable for couples. Back at the Spice Island Beach Resort we got ready for the owner Sir Royston Hopkin’s cocktail party which he hosts for all his hotel guests every Tuesday.

Every other Tuesday it is held at his family home and the hotel guests are given a courtesy transfer to attend. Our dinner at the hotel was hosted by Sir Royston and his wife. It was fine dining at its best with outstanding service. 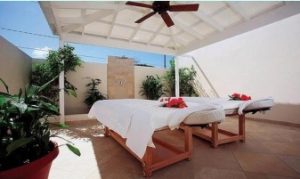 25 June 2014 After breakfast we had a morning at leisure to enjoy the facilities of the Spice Island Resort which included a complimentary neck and back massage at the spa. A relaxing morning was spent on my terrace and in my hammock by the beach, then lunch and it was time to head for the airport and a comfortable club class flight with British Airways back to London.

https://www.travel-stop.co.uk/wp-content/uploads/2014/06/itc1.jpg 297 338 Karin Henry https://www.travel-stop.co.uk/wp-content/uploads/2016/09/TP.png Karin Henry2014-06-21 10:20:092016-11-04 14:42:04Grenada
Many of the flights and flight-inclusive holidays on this website are financially protected by the ATOL scheme. But ATOL protection does not apply to all holiday and travel services listed on this website. Please ask us to confirm what protection may apply to your booking. If you do not receive an ATOL Certificate then the booking will not be ATOL protected. If you do receive an ATOL Certificate but all the parts of your trip are not listed on it, those parts will not be ATOL protected. Please see our booking conditions for information or for more information about financial protection and the ATOL Certificate go to : www.atol.org.uk/ATOL Certificate

Tauck River Cruise on the MS Savor
We use cookies on our website to give you the most relevant experience by remembering your preferences and repeat visits. By clicking “Accept All”, you consent to the use of ALL the cookies. However, you may visit "Cookie Settings" to provide a controlled consent.
Cookie SettingsAccept All
Manage consent