In March 2016, I was thrilled to accept an invitation from Travelsphere to join them on a tour to India.

Flying with Jet Airways, we enjoyed Premier Class travel so were able to experience service of this up-graded cabin first hand. We certainly were very well cared for.

Upon arrival in Delhi, we made the short ten minute ride to the centre where we had our first taste of India. Our hotel greeted us with drinks and a bindi or tikka placed on our foreheads, before we then enjoyed a typical Indian buffet of vegetarian and meat dishes.

We met our Guide and headed off for a tour of New Delhi, visiting Qutub Minar and Humayun’s Tomb, two UNESCO World Heritage sites, learning the history of the Maharajas and Mughals, and how Hindu India was fought by and taken over by Muslim fighters, resulting in the mix of culture and religion in present day India. 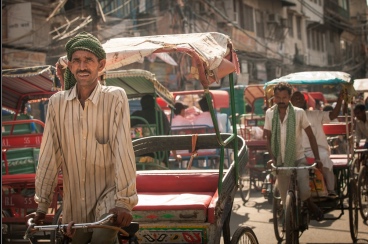 Returning to the hotel through the manic Delhi rush hour, was to be the scariest I have probably ever experienced! The following day we visited Old Delhi to see the Red Fort, followed by an exhilarating ride through the streets of Old Delhi by 3-wheeler rickshaws. From here we visited Raj Ghat, the memorial site of Mahatma Gandhi and the place where he was cremated.

Saying goodbye to Delhi, we then made the 4 hour journey to Agra, transfixed with fabulous stories from our guide, soon realising how well connected he was with the past Maharajas and everyone we would meet was related to him one way or another.

The drive took us through the Indian countryside which looked very similar to the English landscape. There were different types of farming – potato, wheat, and due to the perfect soil, there were brick making companies where fields of bricks drying out and chimneys where they baked the bricks could be seen.

We were hosted for dinner at the Four Points by Sheraton, a new hotel boasting views of the Taj Mahal and from where we departed for our sunrise visit to the Taj Mahal the next morning. And what a way to start our day! Our first view of the beautiful monument was breathtaking. 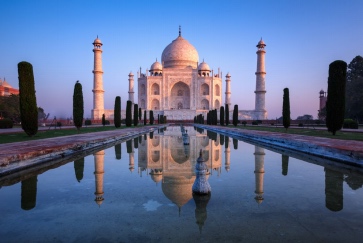 We were able to go inside the Taj Mahal, something I wasn’t aware was possible. The construction of this building started in 1631, taking 22 years to complete.

Our evening’s entertainment was the Mohabbat The Taj show, authentic Indian dancing in ornate costumes….a treat not to be missed.

Next day, we went to Fatehpur Sikri, the red sand stone city built by Emperor Akbar in 1569. Another amazing architectural build with lovely gardens. Journeying on to Bharatpur, we had lunch at the Laxmi Vilas Palace. This property is traditionally Indian and the extension which was added in 2008 is set in the same beautiful traditional decor.

We continued on to the ‘Pink City’, Jaipur, the capital of Rajasthan and what a different city this was! So very different to Delhi & Agra – it was vibrant, colourful, exciting and certainly became the favourite of the group.

We visited the Amber Fort, the history being amazing and it was easy to imagine the Marharaja and his court arriving here on the backs of elephants. The city was surrounded by a wall which looked similar to the Great Wall of China.

After leaving the Fort, we stopped to see the Jal Mahal (meaning the Water Palace) set in the middle of the Man Sagar Lake, with an added bonus of two elephants walking up to the side of us. Then on to the City Palace — still the official residence of the Maharaja- to visit the Museum with plenty of Rajasthani and Mughal art and treasures. Later in the day, the city of Jaipur came to a standstill due to a procession for a Hindu festival Chaitra Navratri in honour of the Goddess Durga. This meant we got the lovely added extra of watching the wide array of floats with different gods on board, marching bands, elephants, camels and we spent an hour amidst these celebrations.

Our last day in India was spent visiting the beautiful Birla Mandir Hindu Temple where we learned the traditions of the Hindus with their holy water and offerings. It was a five hour trip back to Delhi for our last night, before our return flight the next day. India was a wonderful experience and a destination to which I would recommend a visit.

Tips:
Security at hotels is similar to airports.
Public toilets will cost around 10 Rupees (10p) to use.

https://www.travel-stop.co.uk/wp-content/uploads/2016/09/india2.jpg 244 368 Annette Ross https://www.travel-stop.co.uk/wp-content/uploads/2016/09/TP.png Annette Ross2009-03-19 11:15:492021-09-24 15:47:25India - with Travelsphere
Many of the flights and flight-inclusive holidays on this website are financially protected by the ATOL scheme. But ATOL protection does not apply to all holiday and travel services listed on this website. Please ask us to confirm what protection may apply to your booking. If you do not receive an ATOL Certificate then the booking will not be ATOL protected. If you do receive an ATOL Certificate but all the parts of your trip are not listed on it, those parts will not be ATOL protected. Please see our booking conditions for information or for more information about financial protection and the ATOL Certificate go to : www.atol.org.uk/ATOL Certificate

SICILY by Annette Ross
We use cookies on our website to give you the most relevant experience by remembering your preferences and repeat visits. By clicking “Accept All”, you consent to the use of ALL the cookies. However, you may visit "Cookie Settings" to provide a controlled consent.
Cookie SettingsAccept All
Manage consent