1
You are here: Home / News / Blog / GUERNSEY by Isobel Latta

On my first educational trip with Travel Stop I had the pleasure of visiting the beautiful Channel Island of Guernsey, hosted by Premier Holidays. With the Isle of Wight being the only UK island I have ever visited, I did not know what to expect from this trip, and I was pleasantly surprised.

Guernsey is the second largest Channel Island after Jersey, which is visible from Guernsey harbour. I was lucky enough to visit during the famous ‘Tennerfest’ – a 6-week-long food festival that allows participating restaurants to showcase tasty and budget-friendly menus across the island. I don’t think I have ever eaten so much food in such a short amount of time! The 50-minute plane journey from Gatwick felt more like 5 minutes as everyone in the group got acquainted. Upon arrival at Guernsey airport (the smallest airport I have ever seen) we were off the plane, had collected our bags and joined with the rest of the group within 20 minutes.

I had the pleasure of staying in the Duke of Richmond Hotel, just a 10-minute walk uphill from St Peter’s Port. It was a brilliant, quirky hotel with excellent staff who welcomed us with open arms. Stylish and contemporary, the lobby featured various animal print upholstery among mirrored walls and chequered flooring. Our room had a magnificent view of the terrace, which overlooked the pool below.

Within the duration of our trip we were escorted by coach around the island, allowing us to see the varied scenery Guernsey had to offer. Our coach driver was brilliant and told us heaps as we drove around. All roads are very narrow, with the maximum speed limit being 35 mph for the whole island (ironically there were many sports cars on driveways). You will often see small boxes perched at the end of people’s driveways, containing home-grown vegetables or eggs. Beside the food would be a box to put your money in in exchange for the goods – referred by the locals as ‘hedge veg’. This gave us an impression of the honesty of the locals as this might not be something people would trust others to do back home! Our first stop leads us to the most mesmerising construction, the ‘Little Chapel’. 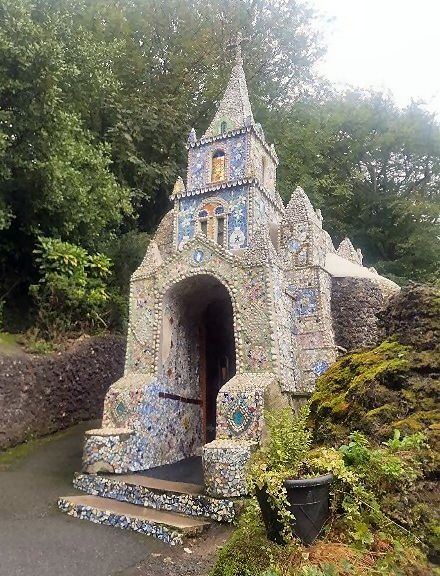 Made out of colourful broken china and pebbles, this unique place almost had a fairy-tale feel to it as you wandered through its extraordinary arches and candle-lit halls. The Little Chapel was a work of art and labour of love built by Brother Deodat. His plan was to create a miniature version of the famous grotto and basilica at Lourdes in France. Measuring a tiny 9 feet by 4.5 feet wide, it is definitely an ‘instagram-worthy’ spot! You cannot miss this on a visit to Guernsey.

In the evening we met in the lobby before making our way to dinner and a tour of St Pierre Park hotel. Before this, however, we were spoiled with a champagne tasting session with a representative from Lanson. As we were staying in Red Carnation group hotels, they were able to give a taster of what services they can offer to large groups, including wine and gin tasting as well as cocktail masterclasses. The host and hotel manager, Gareth, was absolutely brilliant and a pleasure to talk to, helping us with any queries we had. One thing I liked about the Red Carnation hotel group is that every hotel allows pets, and even designs a personalised ‘pack’ for each one. Rooms will feature a bed with a water and food bowl and even a dog/cat menu!

Next, we arrived at the impressive St Pierre Park, sat among a lake and 35 acres of land. Featuring a spa, large function rooms and voted Guernsey’s best gym, the hotel really does have a lot to offer. (Opt for a Junior Suite to have a jacuzzi overlooking the lake just outside your door). The food was as impressive as the hotel itself, and the staff were very friendly and hospitable. If you like large and luxurious, St Pierre Park is the hotel for you. The following day, the group took a ferry over to the neighbouring island of Herm. Beware, though the journey is only around 20 minutes, it can get quite choppy! We stepped off the boat onto the island to see The White House Hotel which is visible from Guernsey. It is the only hotel on the island, however there is the option to camp if you wish. We were greeted and shown around Herm. After walking around for a few minutes, I soon became aware that there were no cars to be seen. What replaced the familiar rumble of traffic was the sound of the ocean, it was bliss! 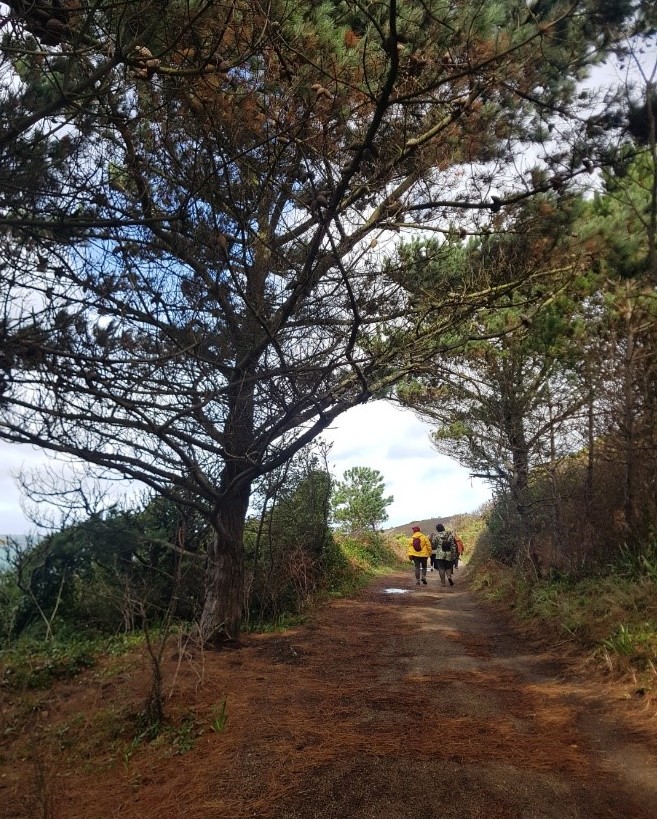 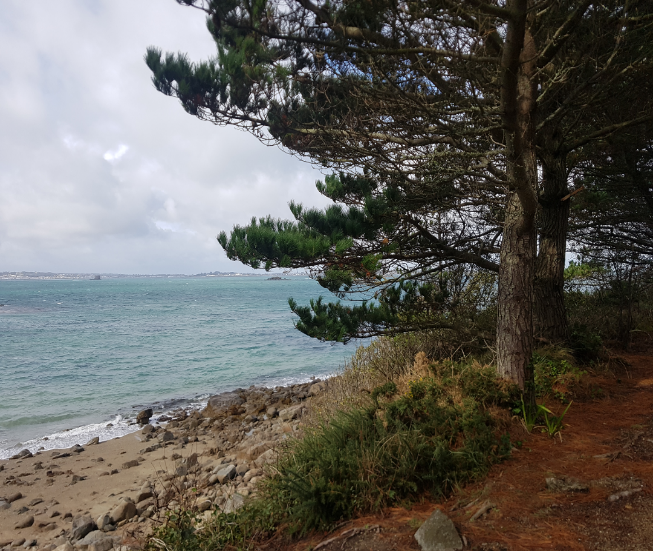 I later learned that there were no clocks, televisions or phones either. The White House is a traditionally styled hotel, furnished with comfortable sofas and hidden corners, perfect for curling up with a book. It doesn’t have a gym, nor a spa, however it didn’t seem to matter here. Herm is the perfect place for you if you want to get away from the hustle and bustle of life and unwind for a few days. Some rooms that belonged to the hotel were in separate cottage-type accommodation that was a couple of minutes’ walk away. I admired this idea of waking up in the morning and walking along the coast to your breakfast. The beaches stood out to me the most. I had expected murky water similar to some of the UK coastline, however these did not compare. Herm was lined with cream-coloured sand with turquoise blue water, it was truly beautiful. There were cliffs on the other side of the island, which was where the puffins lived. We did not have time to see them sadly, but you can kayak or take a boat trip in order to do so!

An interesting note was how quickly the sea level rose and fell around the Channel Islands. It apparently has the fastest sea level change rate in the world. The sea must have been at least 200m out from where we had originally gotten off the ferry, and we had to walk to a completely different point to get back on. We were told that yesterday’s ferry hadn’t made it to the port as the sea level was too low! Luckily, this didn’t happen and we made our way back.
Upon arriving back at St Peter Port, we had some free time to explore the shops before going back to the hotel to get ready for dinner. The Old Quarter, it was called, resembled ‘The Lanes’ in Brighton somewhat, with small boutique and souvenir shops to luxury chocolatiers lining the streets. 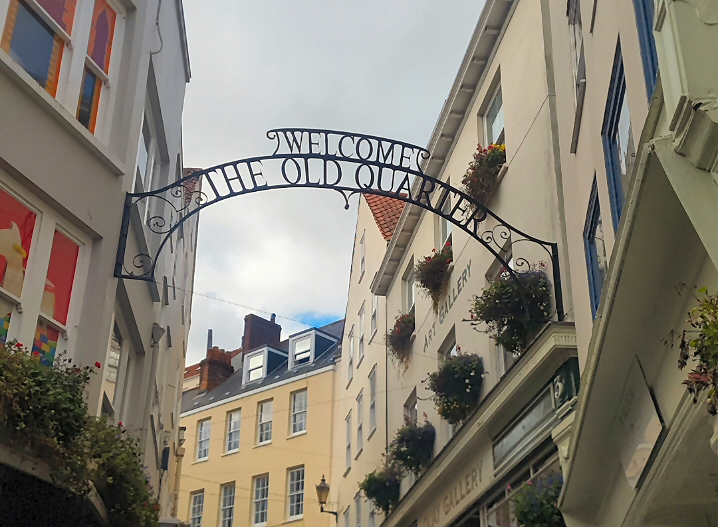 We arrived back at the Duke of Richmond to find fudge waiting for us on our pillows. That evening we went for dinner at the Crows Nest, which is situated directly on the harbour. The view was great and the food was very tasty. Following this we sampled ‘RED’, a grill house and cocktail bar which is definitely worth a visit!

On our final day, both halves of our group swapped hotels for breakfast and a site inspection. We were welcomed into the Old Government House, a must-see building with stunning architecture. Every hallway had a ‘grand’ feel to it, each room as elegant as the next. It even has a curry room, dedicated to holding group events celebrating the Indian cuisine and specialist wines. The view of the harbour is absolutely brilliant, which was visible from the large window in the function hall we had breakfast in. The staff couldn’t have done more for us and we felt very at home here. After joining up with the other group, we carried on down to the port whereby we were given a walking tour by the brilliant Gill Girrard, a Gold Accredited Guernsey Tour Guide. If you had any questions, Gill had the answer! I highly recommend this tour as there is so much to learn about this unique place, especially to do with the war and its’ impacts. There are still German road signs visible, painted on buildings as well as bunkers dotted around the island. We finished our trip with a delicious lunch at the Rockmount in Cobo Bay, then back to the airport for the flight home.

I would hugely recommend Guernsey to anyone who is thinking of visiting. There is a little something for everyone, and though it is part of the British Isles, it is not actually part of the UK. This makes it interesting to spot all the small differences it has to life back home. Main highlights include sampling the delicious fresh food Guernsey has to offer, as well as taking a guided tour to explore the history of the island. Not to forget the serenity and tranquillity of Herm Island. I hope to return for a longer stay next time!

https://www.travel-stop.co.uk/wp-content/uploads/2019/12/Little-chapel-Guernsey.jpg 239 440 Travel Stop https://www.travel-stop.co.uk/wp-content/uploads/2016/09/TP.png Travel Stop2009-12-08 16:56:072021-09-24 15:43:36GUERNSEY by Isobel Latta
Many of the flights and flight-inclusive holidays on this website are financially protected by the ATOL scheme. But ATOL protection does not apply to all holiday and travel services listed on this website. Please ask us to confirm what protection may apply to your booking. If you do not receive an ATOL Certificate then the booking will not be ATOL protected. If you do receive an ATOL Certificate but all the parts of your trip are not listed on it, those parts will not be ATOL protected. Please see our booking conditions for information or for more information about financial protection and the ATOL Certificate go to : www.atol.org.uk/ATOL Certificate

Rome and Florence by Sacha Hale
We use cookies on our website to give you the most relevant experience by remembering your preferences and repeat visits. By clicking “Accept All”, you consent to the use of ALL the cookies. However, you may visit "Cookie Settings" to provide a controlled consent.
Cookie SettingsAccept All
Manage consent