I was lucky enough to get the chance to head over to Germany’s Rhineland region and experience the sights and sounds of German Christmas markets, along with colleagues from Fred.| Holidays, Maritim Hotels and German National Tourist office.

We set off from London St Pancras on Eurostar (a fantastic alternative for those who want to avoid the hassle of flying). With a quick change at Brussels and Koln I arrived within 5 hours. We arrived at the Hotel Maritim Bonn (just outside the city centre) after a 10 minute taxi transfer. In most Maritim’s the hotels are all a similar size only the views, location and amenities change as you go up the price grades.

We walked to the metro stand across the road to arrive into Bonn city within 10 minutes. Bonn Christmas market is open 11:00-22:00 located mainly on Munsterplatz and the surrounding street’s. The bright, colourful stalls contrast beautifully with then historic buildings and city walls that they stand amongst. It’s quaint, traditional and I thought compact. Various gluhwein stalls, as well as those selling local handicrafts, charming decorations and food. 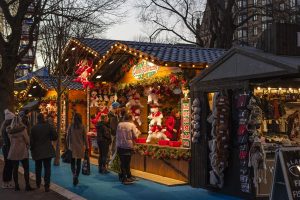 The following morning we enjoyed a walking tour of Bonn which gave us a great insight into certain events in this important city’s history. We were showed the house where Ludwig van Beethoven spent the first five years of his life. Poppelsdorf Palace, which the Prussian King Frederick-Wilhelm III turned into the main university building; the gilded Altes Rathaus ( Old Town Hall ), where the Nazis once held one of their book burnings and more.

We left Bonn and arrived at the towering skyline of Frankfurt or Mainhattan as the locals like to refer to it. This nickname is apt due to the fact that the city is dissected by the Main River and that its 14 skyscrapers give it a similar look and feel to New York’s borough of Manhattan.

The Maritim Hotel Frankfurt that we stayed in is set-up perfectly for those travelling for work purposes, as well as tourists arriving for events at the Festhalle, located next door. The hotel includes a superior floor which can be used by guests who don’t want to be disturbed; 2 rooms designed specifically for women travelling alone and Frankfurt’s most popular Japanese sushi restaurant.

We enjoyed a guided tour by coach and a visit to one of Germany’s largest and oldest Christmas markets. 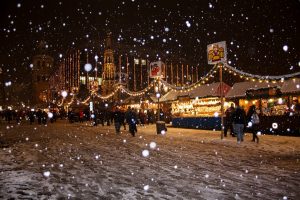 It spreads right across the Romerberg Square and this year boasts the tallest Christmas tree in Germany. As well as Apfelwein a warm drink similar to mulled cider and almond candies known as Bethmannchen, there are stalls selling Quetschenmannchen. These little figure’s are made out of prunes joined together with wine and a walnut for a head. They represent different jobs and hobbies and are traditionally given to declare one’s love to the recipient.

On our final day we transferred to Koln. The Maritim Hotel Koln, was the most impressive of the three we saw throughout our brief stay in Germany. The expansive, glass-roofed lobby allows light to flood in and shows off the beautiful layout of the building. The bottom floor features a range of shops and restaurants, with the rooms being situated on the floors above.

Koln, famous for its breathtaking Gothic cathedral, the people of the city are proud to be represented by three ‘K’s. Firstly there’s Karneval; the season of partying which originates from a time when all the tantalizing food and drink was consumed in one period of frivolity to alleviate any temptation during the month of lent. Secondly there’s Kolsch; a word that refer’s to both the dialect spoken here and the type of beer the locals enjoy. Finally there’s Kolnisch Wasser (literally water of Cologne); the fragrance which has led to the city’s name being used to describe perfume and aftershave all over the world.

There are a total of seven Koln Christmas markets dotted around the city centre and we got to spend most our time in one of the largest. The ‘ Home of the Heinzel ‘ is situated in the Old Town and is themed around the legend of the Heinzelmannchen. These tiny elves are said to have once carried out all the housework and craftwork for the locals whilst they slept at night, until the tailor’s wife set a trap to see them for herself and they were never seen again. 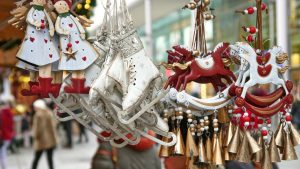 The stalls here seemed to be set out in a more orderly fashion and there was even a map to help visitors find what they were looking for. In order for this German Christmas market to celebrate truly authentic craftsmanship, all sellers are asked to demonstrate the production of their wares at some point during the festive period.

I was sad to leave Koln for the train journey home. Germany is filled with some fantastic Christmas markets. The three we saw were all excellent. It just leaves for me to return and spend longer in the Christmas markets taking in the atmosphere.

https://www.travel-stop.co.uk/wp-content/uploads/2017/05/christmas-market-563199_1280.jpg 720 1280 Helen Pardy Taylor https://www.travel-stop.co.uk/wp-content/uploads/2016/09/TP.png Helen Pardy Taylor2015-12-13 15:34:572017-05-22 15:44:28Christmas Markets - Germany
Many of the flights and flight-inclusive holidays on this website are financially protected by the ATOL scheme. But ATOL protection does not apply to all holiday and travel services listed on this website. Please ask us to confirm what protection may apply to your booking. If you do not receive an ATOL Certificate then the booking will not be ATOL protected. If you do receive an ATOL Certificate but all the parts of your trip are not listed on it, those parts will not be ATOL protected. Please see our booking conditions for information or for more information about financial protection and the ATOL Certificate go to : www.atol.org.uk/ATOL Certificate

Canada by Helen Pardy-Taylor
We use cookies on our website to give you the most relevant experience by remembering your preferences and repeat visits. By clicking “Accept All”, you consent to the use of ALL the cookies. However, you may visit "Cookie Settings" to provide a controlled consent.
Cookie SettingsAccept All
Manage consent