1
You are here: Home / News / Blog / Canada by Helen Pardy-Taylor

Whenever someone asked me where would you want to go anywhere in the world, my answer was a simple one – Canada. Now I can say I’ve been after being offered a trip to Canada along with the Rocky Mountaineer. Our party of 10 left Heathrow on British Airways to Calgary. After a short delay we managed to get on in World Traveller which offers a good in-flight service.

We checked in to Calgary Delta downtown hotel for the next two nights. It was a lovely modern hotel with spacious bedrooms and in a great location just a few blocks from the main shopping streets on 7th & 8th Avenue and walking distance of CN tower. On a room only basis it also has a Starbucks available in the lobby.

After a site inspection of the hotel the following morning we drove to Calgary’s Farmer’s Market which started with a gourmet breakfast. You meet all different stallholders who explain about their produce and history. Next was a city tour to take in the sights of Calgary, with a brief stop at “Heritage Park Historical Village Tour”. 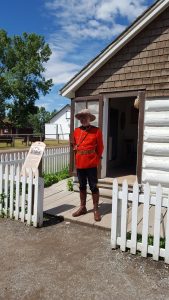 I so wished we had longer so I could speak to all the costumed workers to discover what it was like “back in time”. All too soon we arrived back at the hotel before taking a walk to the Calgary Tower for a White Hat Ceremony where we all became honorary Calgarians – and yes, I still have my hat! We enjoyed a delicious meal in the revolving restaurant at Sky360 at the top of the tower and would recommend this for a special occasion. 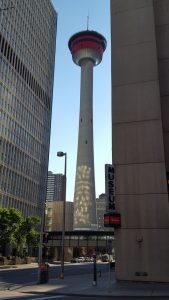 Next day we joined a Brewster coach for the “Explore Banff Sightseeing” tour. We took in the culture, geology & wildlife while viewing the spectacular sights of the area. This included a trip up Sulphur Mountain on the Banff Gondola (I’m scared of heights but I’m not missing out!), Jack Lake, Lake Minnewanka including a cruise. 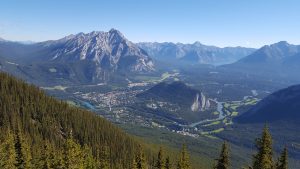 We dropped off at Fairmont Banff Springs, a luxury castle like building set in Banff National Park. We had a quick site inspection and finished up on their patio with drinks taking in the stunning views.

It was a 40 minute walk back into Banff to check-in to the newly opened Moose Hotel. It’s in a great location just a short walk from the shops and restaurants. Bedrooms are comfortable and some of us had kitchenettes.

Checking out the next morning we took a short walk to Banff International hotel for a site inspection and breakfast. This hotel has been newly refurbished and again in a great location. 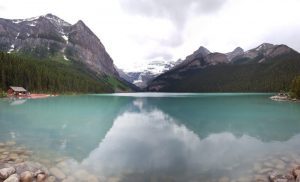 It was from here we boarded the coach for our full sightseeing tour to Jasper along the Icefields Parkway. It’s one of the most scenic drives in the world. We took in the sights of Castle Rock and stunning Lake Louise before a ride onto the surface of the Athabasca Glacier and a quick stroll along the Glacier skywalk. 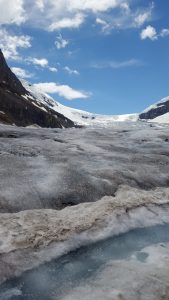 Our night was spent at Fairmont Jasper Park & Lodge, my favourite hotel on the trip. It’s a beautiful, peaceful hotel overlooking Lake Beauvert. The sun-set and sun-rise were breathtaking. The rooms were a good size in cabin style appearance around the lake. Lots of activities are available and watch out for bears on the golf course! Our dinner at Orso Trattoria was delicious.

After an early check-out we were transferred by Rocky Mountaineer to Jasper station to join the Rocky Mountaineer. The next three days we would be following their route ‘ Rainforest to Gold Rush ‘ journey while in Goldleaf. In Goldleaf you are in a high glass-domed coach which puts you right in the middle of the awe-inspiring scenery of the Canadian Rockies. Complimentary beverages including gourmet snacks are included throughout the journey by the most excellent attentive hosts. 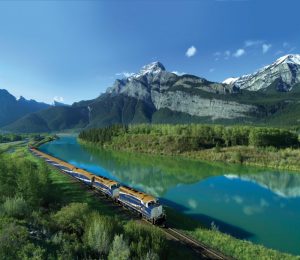 The dining available was excellent with a great choice of meals available. All of which are beautifully presented and delicious. I thought the vestibule at the rear of the coach would be extremely popular and crowded, however many a time I would find myself standing there alone or a couple of others breathing in the fresh air and taking in the scenery. The train hosts will let you know when there’s a popular photo opportunity to be had and the train will always slow down to allow for this.

It was a late arrival at our hotel Best Western Tower Inn at Quesnel and this is the first time you discover just how well organised the Rocky Mountaineer is. You find your luggage in your hotel room every time and leave you luggage to be collected on your departures. The Best Western Tower Inn is of a moderate standard but with good clean comfortable rooms, offering a pub and restaurant downstairs.

The next morning we depart for Whistler, taking in the views including the rugged desertification of the Fraser Canyon and take in the air of the Cariboo Gold Rush region’s pastoral ranchlands. We all to soon arrived into Whistler and the Fairmont Chateau for our night which is nestled at the base of Blackcomb mountain, a landmark ski-in ski-out hotel. I loved this beautiful modern alpine setting with it’s many facilities and only 10 minutes walk to the centre of town.

Next morning we left for a village walking tour and breakfast in the town. Whistler has a quaint alpine atmosphere and spectacular mountain views all around. The village is a pedestrian only area where everyone can wander around freely amongst shops, restaurants, bars, parks and accommodation.

We rode up in a gondola to the top of Whistler Mountain. Unfortunately it was foggy so not much to be seen. After a short stop at the top it was time for the Peak 2 Peak gondola ! Luckily for me we didn’t get into the special glass-bottomed gondola! Again as so foggy we didn’t get to see much. Lunch was taken at the top of the mountain, following which we had to make our way down. The plan was all down Blackcomb via chairlift so we would arrive at the hotel. Having had a glimpse of the chairlift, I decided not to and had to go back via the Peak 2 Peak and gondola to Whistler knowing that any chances of viewing bears in their natural habitat would be missed as I was told you would see them on Blackcomb. However, I was the lucky one! None were viewed on Blackcomb and while taking the gondola down Whistler the representative and I saw a single brown bear followed by a mother with 2 cubs. How exciting. I couldn’t stop shaking and stop the smile from my face. We just made it back to the transfer bus, just another 4 hours on Rocky Mountaineer to Vancouver.

Vancouver was very busy being Canada day, so a longer transfer than normal to arrive at our hotel Sheraton Vancouver Wall Centre Hotel. It’s a very modern hotel with two towers located in the heart of downtown Vancouver. The rooms were large and have floor-to-ceiling windows with panoramic views of the city.

Next morning was site inspection of the hotel after which we made our way to Canada Place to enjoy “Flyover Canada”. It’s a totally breathtaking flight simulation ride and I truly felt as though I was flying. For the next experience we drove to Westin Bayshore Hotel to join our “Sea Vancouver zodiac sightseeing tour”. We cruised along the Vancouver Inner Harbour and soared up to 55kph! We were dropped off at Granville island to enjoy the public market and boutique shops for an hour. We completed our day with a Vancouver Foodie Tour Guide, walking around learning about the history and tasting signature dishes at award winning institutions.

A quick ride to the airport and change before checking-in for our return flight home. Only this time it was in Club World and what a different world it is! Fully flat bed, lots of room, service was very attentive.

Canada was everything I thought it may be and a whole lot more. Now just leaves for me to return and also visit the other regions.

British Airways : Vincent Scott who managed to get us all out on the flight with minutes to spare! and for the return upgrade.

Rocky Mountaineer : Craig Upshall for the most awe-inspiring train journey ever!

And mostly for all the wonderful memories created.

https://www.travel-stop.co.uk/wp-content/uploads/2017/05/image1-2.jpg 693 800 Helen Pardy Taylor https://www.travel-stop.co.uk/wp-content/uploads/2016/09/TP.png Helen Pardy Taylor2016-06-25 12:46:012019-03-27 13:28:54Canada by Helen Pardy-Taylor
Many of the flights and flight-inclusive holidays on this website are financially protected by the ATOL scheme. But ATOL protection does not apply to all holiday and travel services listed on this website. Please ask us to confirm what protection may apply to your booking. If you do not receive an ATOL Certificate then the booking will not be ATOL protected. If you do receive an ATOL Certificate but all the parts of your trip are not listed on it, those parts will not be ATOL protected. Please see our booking conditions for information or for more information about financial protection and the ATOL Certificate go to : www.atol.org.uk/ATOL Certificate

The Fat Bird & The Boat by Bridget Keevil
We use cookies on our website to give you the most relevant experience by remembering your preferences and repeat visits. By clicking “Accept All”, you consent to the use of ALL the cookies. However, you may visit "Cookie Settings" to provide a controlled consent.
Cookie SettingsAccept All
Manage consent