I was lucky enough to be invited to join Prestige Holidays on a jam-packed 49 hours in Calgary for the Calgary Stampede.  Having a morning flight out and with such a short amount of time, I decided to spend the night before in an airport hotel at London Gatwick to try and make the process as smooth as possible.  This was definitely worth it, and I spent the night at the Sandman Signature Hotel.  The next morning I was taken by my private transfer to London Gatwick which was included in the hotel.

After a short delay in departure we boarded the new Westjet Dreamliner and found our way to our seats.  The leg room was exceptional, perhaps the best I’ve ever seen in economy.  The large windows come with a dim switch as opposed to a blind to pull down and seem to make the cabin a lot brighter and more filled more with natural light.  The flight was exceptional, the crew were amazing, the food was some of the best I’ve ever had and the inflight entertainment certainly had enough to entertain you for the 9-hour flight.

Upon landing in Calgary, I was taken back by the friendliness, speed and efficiency of the airport staff.  The stern, hard faces of immigration with militant uniforms that I was used to was no where to be seen.  There were smiles, casual clothes, jokes and a very friendly feel all round.  The stampede atmosphere was very apparent with cowboy hats all round and cowboys singing country songs as you exited the terminal.

A short drive in to downtown Calgary brought us to our hotel, the Delta Hotels by Marriott Calgary Downtown and we were shown to our room for an extremely quick freshen up and change before heading out on our walking tour with CalgaryWalks & Bus Tours.  Our walk was to the Sky Tower, stopping at some of the cities intriguing art work, historical buildings and amazing architecture.  When we arrived at the Sky Tower we went up to the Observation Deck and took in the 360° views of the city. 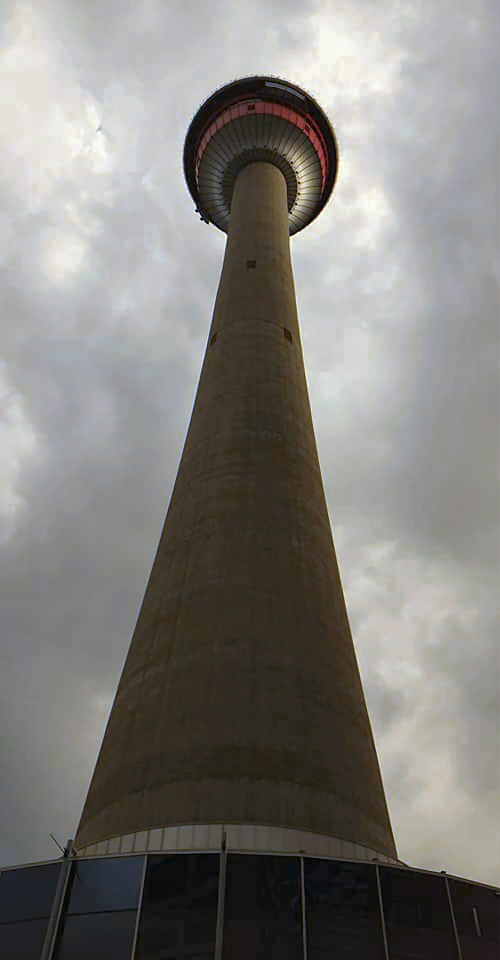 There is a small glass platform that juts out from the rest of the deck, with a glass floor! This is where we were invited to stand while we took part in our “White Hat Ceremony”, the long-standing tradition in Calgary showing their Western hospitality and good cheer, and said the White Hat Oath.  Flocks of tourists gathered to record and take photos of us, so I’d imagine we are all famous across the world. And none of us fell through the glass.

We then went down one level to the Sky 360 restaurant and indulged in some of the finest Canadian food and locally brewed ale.  The restaurant revolves giving you excellent views whilst you enjoy your meal, which for me was perhaps the best Rib Eye Steak I’d ever had.  With us all then slipping in to a food coma and being very tired from all the travelling, we had a short walking tour back to our hotel stopping at the Olympic Plaza to look at the Famous 5 sculpture, and learn all about how these women fought to have women recognised as “Persons”.   We arrived back to our hotel and retired to our rooms for a much-needed nights’ sleep in the very comfortable, large beds.

The next morning, we met one of the hotel representatives for a typically Canadian breakfast.  From here we then headed to Studio Bell, home of the National Music Centre, sporting exhibits on Canadian music history.  The architecture of the building was impressive, being completely designed with acoustics in mind, so for anyone interested in architecture or music, this is a must-do visit.  Elton John’s piano that he wrote his first four albums on is here along with Geddy Lee’s Big Beautiful Bass Exhibition.

From Studio Bell, we had a very scenic walk along the Bow River to Deane House in Inglewood, a beautiful restaurant set in a house built in 1906 that is supposedly the most haunted house in Canada! They had tables inside as well as outside in their immaculate gardens.  The food was exceptional with a unique menu using ingredients straight from their garden.

From Deane House we then made our way to Smithbilt Hats to see where all the proper cowboy hats are made! A very quick informative tour, some window shopping and trying on all sorts of hats, we then made our way across the road to Ol’ Beautiful Brewing for a tour of their Brewery and some samples! 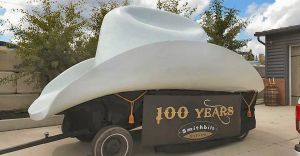 After sampling several of Ol’ Beautiful Brewings’ lovely merchandise, we then made our way to the Stampede grounds.  I wasn’t really sure what to expect from the grounds, but it definitely was not what I was expecting.  It was huge. Like a giant fun fair. There were rides, food stalls, carnival games, mascots, exhibitions, pubs, a first nation camp, definitely something for everyone.  We had a wander around the first nation camp, went inside a tipi and then watched some traditional dancing.  We then had a good wander around the grounds before heading in to the Clubhouse for dinner.  We were joined by a surprise guest, a real-life cowboy, and pervious winner of the Calgary Stampede Mr Jim Dunn. Whilst we indulged in our buffet food, Jim told us stories of what it was like to be part of the Stampede.

We left the Clubhouse and had a backstage tour of the Bell Grandstand Show.  This show is put on every year by the Stampede and features The Young Canadians.  This year the show was called Trailblazer and was led by the show master Onalea and was accompanied by the Polyjesters.  An excellent performance full of acrobatics, songs and dancing, concluding with a spectacular firework show. But before the show are the Chuckwagon Races which we were lucky enough to see from the Press Area.  As we followed some of the Young Canadians from backstage up the ramps to outside, we found ourselves standing in the middle of both bleacher style seating banks and we were led into an area right infront of the races. We really did have the best “seat” in the house, as we stood right infront of the railings as the horses and chuckwagons thundered by.  As the races began to draw to a close, this is when we were then escorted to our seats ready for the Grandstand Show.

After a jam packed day we were certainly ready for bed so walked back home through the bustling stampede where parts of it were only just coming to life! It certainly looked like a good place to continue the night with a drink or two.

We awoke early the next morning and got ready to be picked up and taken to Heritage Park for breakfast.  Heritage Park is a historical village on the banks of the Glenmore Reservoir.  With all the staff dressed in early 1900’s clothing, a walk around this park takes you back in time with a good look in to the history of Calgary.  We took a ride on a horse & cart as well as the steam train that goes around the village and then took a stroll through Gasoline Alley, looking at all the automobile memorabillia items, most from before the second world war.  We walked down the streets lined with historical buildings, including houses and shops, many of which are original.  After a quick spot of souvenir shopping and some maple syprup in tow, we were picked up in our taxi and taken back to the Stampede Grounds ready for the afternoon events. 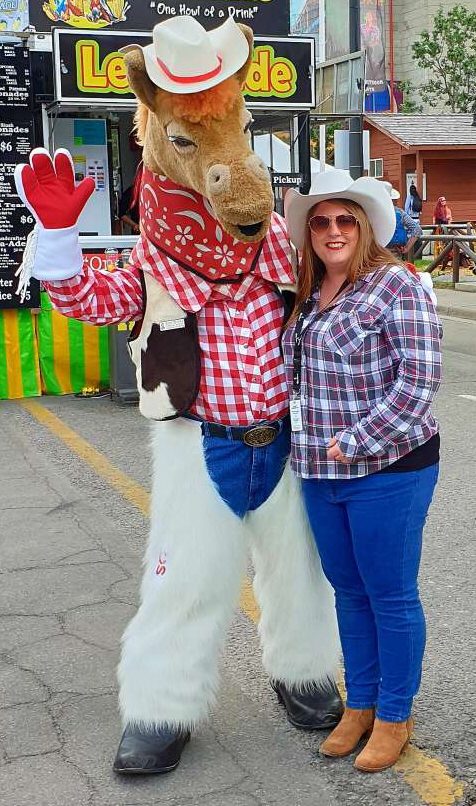 Dressed head to toe in “Western Wear”, hat and boots included, we were joined by The Food Network for a food tour of the Stampede.  Starting with “The Hangover Cure” from Arepa Boss, a deep fried arepa filled with BBQ Pork, Sausage, Haloumi, Eggs, Salsa, Guasacaca sauce, prosciuotto, mayonnaise and garlic sauce, we weren’t really sure if we could eat anything else. We were then presented with bacon filled pancakes with maple syrup, so we managed to squeeze that down.  This was followed by a refreshing Rose Lemonade and concluded with a Pinapple Boat from Summerland Soft Serve. With full stomachs, we made our way back in to the Grandstand area and shown to our seats to watch the Rodeo!

The atmosphere was excellent, with the crowd going wild for the cowboys trying to last 8 seconds on the bucking bulls and horses!  We were then lucky enough to be taken backstage for a schute tour. We were shown all of the areas where the cowboys get ready and relax, all of the technology and production side of things for the TV, and then taken out right behind the schutes where the cowboys are waiting to mount their bucking horses. Definitely the best seats in the house.  After this we were taken back to the press area to watch the end of the rodeo before being picked up in our taxi and taken back to the airport.  A very smooth check in and security screening, a delicious burger at A&G, and then we boarded the plane and headed back to the UK.  I would like to say how the flight was on the return, but needless to say, after a fun fuelled 49 hours, I passed out and woke up about an hour before landing!

https://www.travel-stop.co.uk/wp-content/uploads/2019/07/cowboys.jpg 521 1000 Travel Stop https://www.travel-stop.co.uk/wp-content/uploads/2016/09/TP.png Travel Stop2009-07-26 11:43:032021-09-24 15:44:31CALGARY STAMPEDE by Hayley Chambers
Many of the flights and flight-inclusive holidays on this website are financially protected by the ATOL scheme. But ATOL protection does not apply to all holiday and travel services listed on this website. Please ask us to confirm what protection may apply to your booking. If you do not receive an ATOL Certificate then the booking will not be ATOL protected. If you do receive an ATOL Certificate but all the parts of your trip are not listed on it, those parts will not be ATOL protected. Please see our booking conditions for information or for more information about financial protection and the ATOL Certificate go to : www.atol.org.uk/ATOL Certificate

Barbados & St Vincent
We use cookies on our website to give you the most relevant experience by remembering your preferences and repeat visits. By clicking “Accept All”, you consent to the use of ALL the cookies. However, you may visit "Cookie Settings" to provide a controlled consent.
Cookie SettingsAccept All
Manage consent